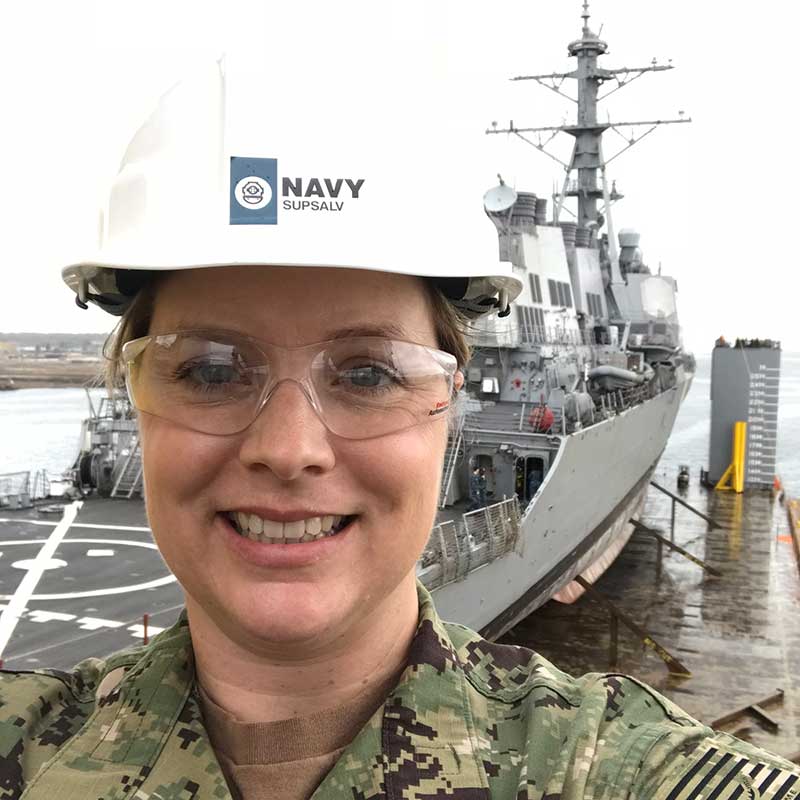 Captain Sarah Rollings (Sarah) served aboard USS La Salle (AGF-3) stationed in Italy before joining the Engineering Duty Officer community and earning her Master of Science degree in Mechanical Engineering. She served her final active-duty tour in San Diego overseeing the maintenance and repair of Navy ships in various San Diego shipyards. In 2006, Sarah joined the U. S. Naval Reserves and continued to support ship maintenance and repair while specializing in dry docking and heavy lift ship movement. As a Reservists in 2011, Sarah deployed to Bahrain and Iraq in support of Iraqi Freedom and she has since commanded several Reserve units. She is one of three Naval officers who are authorized to lead the Navy’s oversight and assurance during float-on and float-off operations of Navy ships on contractor vessels for global transport. Some of Sarah’s operations include the heavy lift transport of Mine Counter Measure and Patrol Craft vessels, a Lebanese Navy Coastal Security Craft transported under Foreign Military Sales, and USS Fitzgerald (DDG-62) delivery from Japan to Mississippi for post-collision repairs.

In the Energy Industry, Sarah initially worked as a Project Engineer at Sempra Energy in San Diego responsible for owner’s oversight of the engineering, construction, and commissioning of the marine facilities for two LNG import terminals in Louisiana and Mexico. She used her degree in ocean engineering and background in the Navy to ensure the successful arrival of the first LNG carriers at each terminal. In 2014, she moved to Houston to work for Shell in their Shipping & Maritime department then moved to London to work as the Project Manager for LNG as a marine fuel where she was responsible for delivering ships capable of fueling LNG fueled vessels in the European region. This included leading the team that completed Shell’s first ever LNG supply delivery to an LNG fueled vessel in late 2018. With the global drive to reduce greenhouse gas emissions, Sarah was accepted to a new role at Shell in 2021 as an Account Manager where she works directly with shipping companies on solutions that support their decarbonization journey and options to reduce, eliminate, or offset the emissions from their ships.