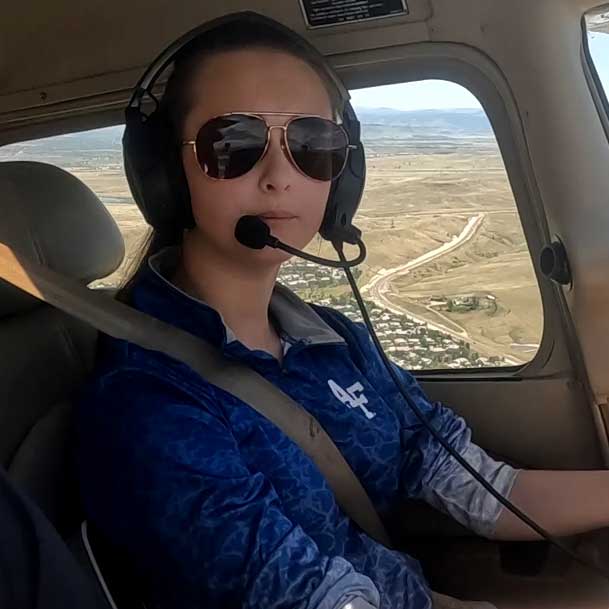 Makayla was born in Santa Monica, California. When the family moved to Colorado, and when she saw the gliders soaring over the U.S. Air Force Academy and it began to fuel her love of everything aviation and aerospace. Then in June of 2012, the Waldo Canyon Fire had scorched 29 square miles into western Colorado Springs and triggered the evacuation of 32,000 residents, including parts of the U.S. Air Force Academy. Seeing the firefighter pilots’ bravery on T.V., she realized that her desire to be a pilot was not just a fantastic opportunity for her personally, but what she could do for others as a pilot. Whether it was volunteering as a pilot to fight fires, transport patients or lifesaving organs, emergency relief, animal rescue, conservation projects, or simply for education purposes she knew as a pilot she could have a positive effect on other people, the environment, and the future.

She has maintained a 4.3 GPA, taking honors-level classes in high school as well as taking concurrent enrollment courses at the local community college. She has expanded her studies beyond the traditional high school and college curriculum by attending Denver Colorado’s Wings Aerospace Pathways (WAP) academic program. The WAP program focuses on aviation, astronomy, tools skills and electronics, ground school, airplane crash investigations, drone flight/soccer, aerospace career planning, and participating in building a Van’s RV‐12 single‐engine, low wing airplane. In 2022 the WAP team finished building the RV-12 and Makayla was the first female pilot to fly the plane with her CFI, John L. Barry CEO of Wings Over the Rockies Museum.

Makayla is also a member of an AFA Stellarxplorers team, trained and guided by mentors from Lockheed Martin. During the Stellarxplorers competition, teams are given a scenario describing the system’s mission and constraints and are challenged to provide a solution to a typical space design problem, such as orbit determination, satellite component selection, or launch vehicle planning. In 2022 her team made it to the national semi-finals. In 2022, Makayla became a professional drone pilot by achieving her Part 107 Remote Pilot Certificate from the FAA. She is also an active member of the 2021 United States Drone Soccer tournament winners, Predators drone soccer team.

As a rising third-year cadet in the Air Force JROTC, she is a dedicated leader in the Cyber Patriots program. In the course of the Cyber Patriots competition, teams work through a series of online competition rounds. They are given a set of virtual operating systems and are tasked with finding and fixing cybersecurity vulnerabilities while maintaining critical services. Makayla has been bestowed many awards and decorations with the AFJROTC, such as the American Veterans ROTC Recognition Award, Outstanding Cadet Ribbon, Outstanding Flight Ribbon, Academic Ribbon, and Cadet Leadership Course (CLC) Ribbon, among others. As a high school student, she has also received the rare and prestigious Ground School Badge, Flight Solo Badge, Unmanned Aircraft Badge, and Flight Certificate Badge.

In May of 2021, she was awarded the James C. Ray Foundation and Wings Over Rockies Captain Jeppesen Foundation scholarship to help in achieving her glider pilot’s license. She fulfilled and exceeded the expectations of the board members who presented her with the glider scholarship by completing her first solo a few days after her 16th birthday in September of 2021. Finally, in less than a year after receiving the scholarship and in overcoming the challenges of both Covid and Colorado weather, along with the guidance and instruction of her CFI, John L. Barry, Maj Gen, USAF (Ret), she completed her glider training at Mile High Gliding in Boulder Colorado. After 75 total flights, 18.30 total hours, and 10 solos, 2.0 solo hours in a Schweizer SGS 2‐33 glider, having completed both the FAA written and oral examination and completed her check ride on March 11th, 2022, she became a private pilot with a glider rating.

In the last year, she has won additional scholarships to complete the next step in her aviation journey to train for FAA Part 141 for her powered single-engine rating at McAir Aviation in Denver, Colorado. Her Scholarships include the 2022 Sporty’s Foundation Flight Training Scholarship for WAI Chapter, EAA Florence “Coffy” Gregory Endowment, Colorado Aviation Business Association, and the Daedalian Flight 18 Scholarship.

During her academic career and other extracurricular activities, she has also managed to achieve work experience and has had the privilege of serving as a mentor, volunteer, and intern. Makayla recently spoke at the Women in Aviation’s, Girls in Aviation Day in Denver as a mentor to young aspiring aviators by sharing her experience flying gliders, drones, and single-engine airplanes. She wants to continue to be a high school and eventually college ambassador mentor for all those kids coming up behind her who wish to follow their dream of becoming a pilot, astronaut, or anything in the STEM field.